First contact between Bill Sample and I occurred in Mission City, BC, around 1954. I would have been 7 or 8, and Bill 3 or 4. My parents and I occasionally visited the Samples, since my Dad, Len Stearns, played sax in a small combo with Bill’s Dad Rod on trombone, and his Mom Ruth on Piano.  They played for dances and parties all around the Fraser Valley. Bill and I both have memories of being at some of their rehearsals. Dad would give me spoons or whatever, and I’d play along. Bill and I likely met, but because of our age difference, probably didn’t ‘hang out’.

We weren’t to meet again until 17 years later, after I moved to Victoria from Vancouver in 1969. Bill once told me that he had come down to the Strathcona Hotel to check out ‘this new guy from Vancouver’. I was hired to play there six nights a week in the Old Forge Nightclub. Coincidentally, David Foster had played the same gig a year or two before.

Over the next couple of years, Bill and I got to know each other and often marveled at the coincidence of our parents having played together when we were kids. We started doing some gigs and jam sessions together, and eventually, along with Norm MacPherson and Jerry Adolphe, began discussing the idea of forming an original band.  So in 1974, Bill Sample, Morry Stearns, Norm MacPherson, and Jerry Adolphe formed the first version of The Sample Stearns Band. We settled on that name after failing to come up with an alternative everybody liked. ‘Thrush’ was a contender until we realized that as well as the name of a bird, it was also the name of a fungal infection.  So, since Bill and I were the two main songwriters, ‘The Sample Stearns Band’ seemed like the most straight forward and unpretentious solution. We did a number of gigs as a four-piece, with Bill on keys, key bass, and vocals, me on keys, bass, and vocals, Norm MacPherson on guitar, and Jerry on drums and vocals.

Eventually, we felt the need to expand our sound and instrumental possibilities, so we decided to have two full time keyboardists and a full time bass player. We auditioned several players, and eventually asked Lee Oliphant (Bill’s old friend, recently returned from the UK) to join us. We continued doing gigs and shows around Victoria, the Island, and the BC interior as a five-piece, but by 1976, gigs were getting harder to find, so we finally decided to go our separate ways, explore other possibilities, and try to make a living.

Bill went to Paris. Norm and I and eventually Jerry went to LA, where we played with Kenny Rogers’ nephew, Dann Rogers, Booker T, Priscilla Coolidge, Burton Cummings, Michael McDonald, Tom Bresh, Susan Raye, and came close to doing a tour with Donald ‘Duck’ Dunn of Booker T and the MG’s, and Levon Helm from ‘The Band’.  We were invited to become an ‘in-house’ recording studio rhythm section at Crystal Sound in Santa Monica, where many different artists had recorded, including Stevie Wonder, Ben Vereen, Millie Jackson, Jackson Brown, Eric Burdon & War, and others. Stevie had been the sole client for almost two years doing ‘Songs in the Key of Life’.

Meanwhile, Norm had formed a friendship and a musical relationship with an amazing young LA singer/songwriter named April Fulladosa. At the time, April was working at the Starwood, a well-known Hollywood showclub where Van Halen, The Monkees, The Meters, Glen Campbell, and others had played. We began to spend some time together, playing music, and exchanging song ideas, and in 1977, collaborated on April’s first solo album, ‘Home Base’, which we recorded at TTG Studios in Hollywood, where Jimi Hendrix, Frank Zappa, and The Doors had recorded.  Bill flew in and contributed some strings, horns, and keys on the album.

All during this time, one of Norm’s musical dreams was to combine April’s amazing songs and vocals with The Sample Stearns Band, and the letters and phone calls had been flowing back and forth for a while. Finally, in late 1977, the decision was made to return to Canada and reform The Sample Stearns Band with April.

The rehearsals began in our friend Ken Ashcroft’s garage... and off we went. It was truly a labour of musical love. We were obsessed, possessed, or whatever the right word is. Maybe ‘dedicated’ says it best. Our rehearsals were like our day jobs. We would spend hours, days, working on a song, an intro, or a particular lick. It all had to be as perfect, as beautiful, and as tight as we could humanly make it. And it paid off... at least in terms of recognition. ‘SSB’ became one of the West Coast’s best loved and most followed bands. We did sell-out shows at Harpo’s Cabaret in Victoria, several radio and TV concerts and specials. We toured with Maynard Ferguson of ‘Rocky’ fame, opened for Tower of Power, and with the help of Rob Mingay, one of our ‘co-managers’, we secured a recording deal with Shelly Siegel of Mushroom Records in Vancouver, where ‘Heart’ and many other bands had recorded. We recorded our first official demo there. We were very excited and really thought we were off and running. Suddenly, without warning, Shelly died, and the deal died with him.  A few dubs and cassettes were made, but the two inch master tapes remained in the vault at Mushroom Records until 1997, when Bill was informed that they were clearing out old tapes. He and engineer Rolf Hennemann put the tapes through a ‘baking’ process, since they wouldn’t play anymore, and Bill went on to produce ‘The Baked Tapes’ CD, the only actual digital recording of The Sample Stearns Band.

In 1980, we signed a management agreement with David Foster and his attorney, Ned Shankman.  They attempted to ‘shop us around’ to various labels in LA, just when the record industry was going through some very rough times. Unless you were Elton John or The Knack, you either couldn’t get a record deal or you lost the one you had. The timing couldn’t have been worse for SSB, a jazz/fusion/pop/rock/whatever band with no particular ‘hit’. Eventually, reality set in. We just weren’t able to keep it going financially. So sadly, we reluctantly went our separate ways, but kept in touch, did a couple of reunion shows, and remain close to this day. We continued performing and recording together in different combinations during the follow years, collaborating on various studio projects, concert appearances, etc.

The legend of SSB still lives on in the hearts and minds of our most ardent fans. And even the slightest tease or mention of a possible reunion causes social media to go ‘all-aflutter’.

It was a priviledge being in The Sample Stearns Band, probably the best original band I was ever fortunate enough to be a part of. 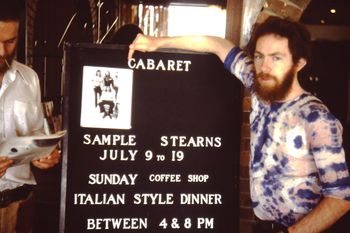 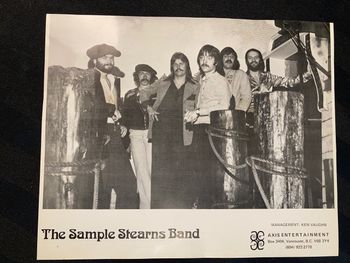 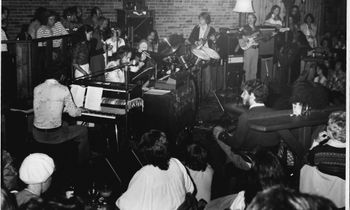 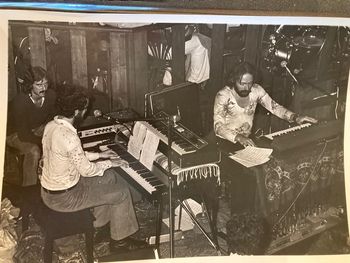 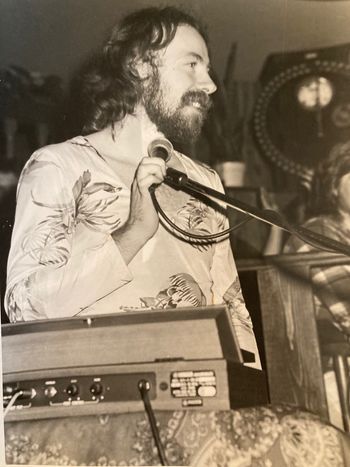 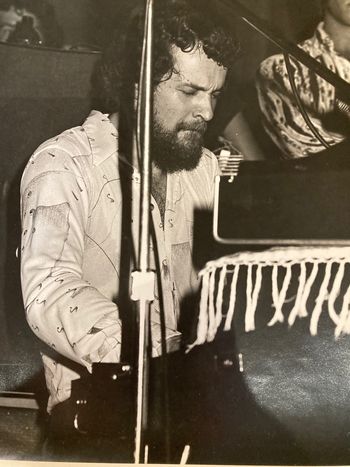 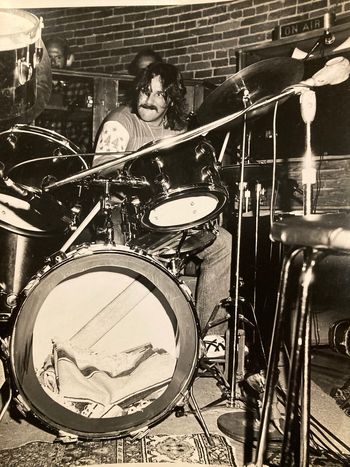 Jerry layin' it down (at Harpo's) 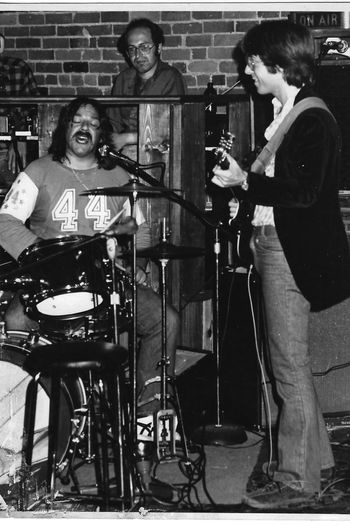 Jerry and Norm at Harpo's 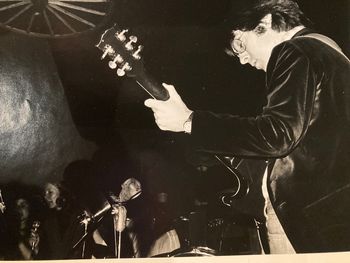 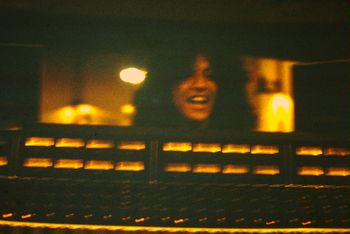 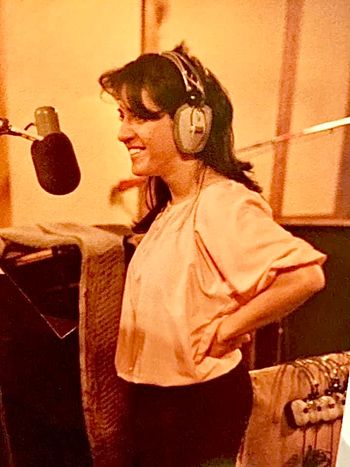 April at the mic. 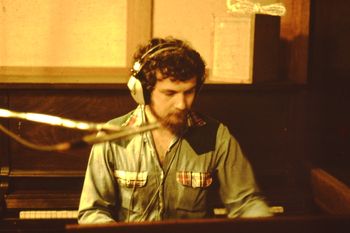 Adding some keys to April's 'Home Base' album. 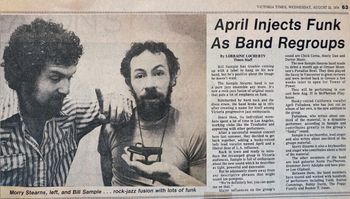 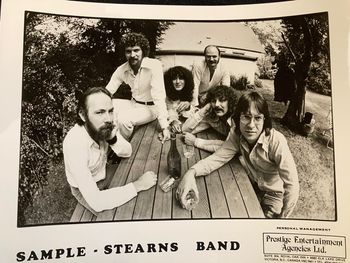 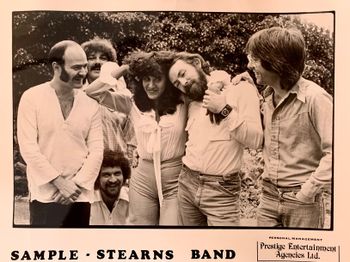 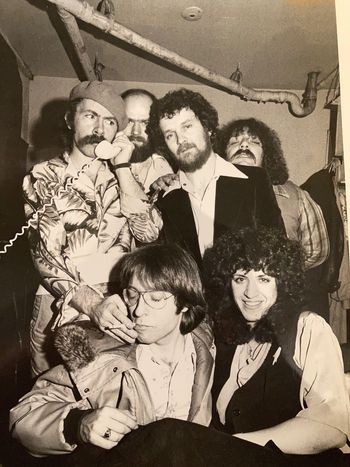 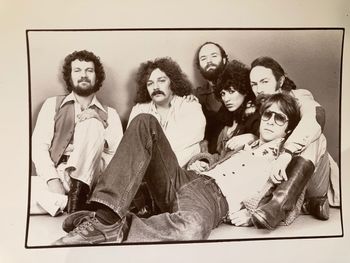 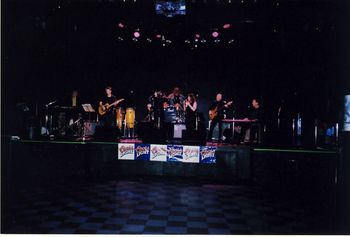 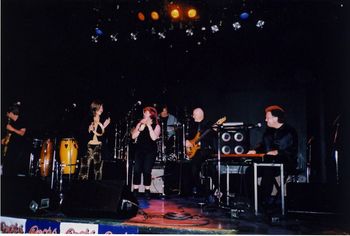 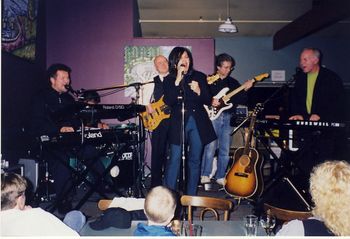 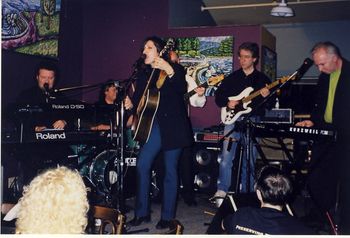 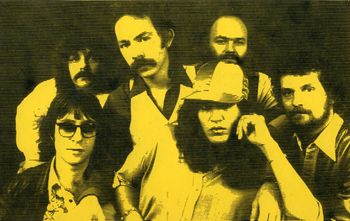 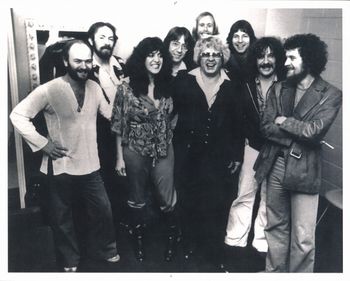 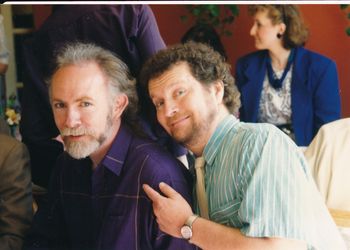 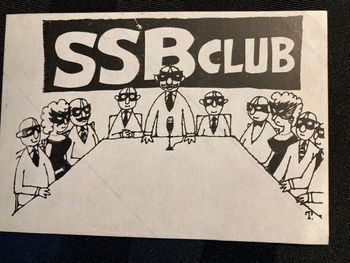 No idea what this was... we just liked that it said SSB! 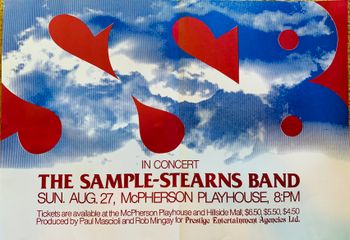 Big gig at the Mac. 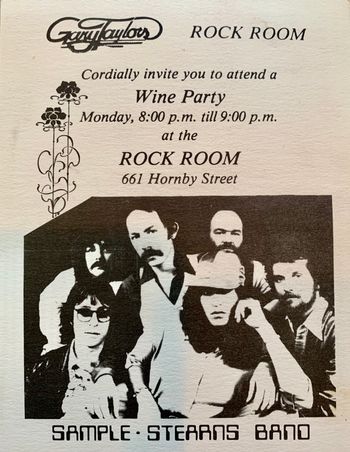 Played there a couple of times. 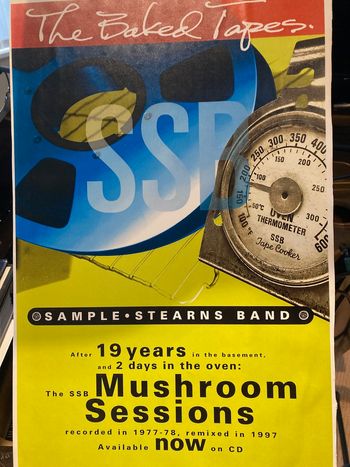 Our one and only album. Thanks to Rob Mingay, Shelly Siegel, Rolf Henneman, & Bill Sample. 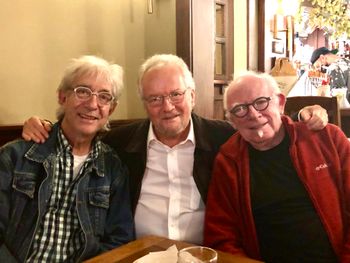