In 1987, while I was working at Seacoast Sound, the City of Victoria made a formal bid to host the 1994 Commonwealth Games. As part of its bid, an audio-video presentation was commissioned, and put in the very capable hands of a wonderfully talented producer, Gary McCartie. Mel Cooper, my Seacoast boss at the time, approached David Foster to write the music. David’s response was “I can’t take this on right now, but you’ve got a guy right here in house who can handle it.  Ask Morry Stearns.”  He did, and the rest is history.

Gary and I worked closely together over the next few months and the result was ‘Welcome to Our Island Home’, a 20-minute video presentation with music, sound effects, and narration. I composed the music and most of the lyrics, with lyric contributions from Dale Baglo and Gary himself.  Dale wrote the beautifully worded narration voiced by Delores Bate.  It was presented as a large multi-projector slide show, displaying the natural wonders of Vancouver Island, the beauty of Victoria in particular, and its suitability to host the Games. It was visually quite beautiful, and combined with the music, sound effects, and narration, elicited a lot of heartfelt emotion. The bid went to Montreal and competed against Halifax, Ottawa, Vancouver/Richmond, and others.  We were thrilled to find out we had won for Canada.

The following year, in 1988, the world-wide competition was to be held in Seoul Korea, and this time we were competing against New Delhi, India and Cardiff, Wales, so a second AV presentation was commissioned, and I was again given the honour of composing the music.  This time, Gary asked me to work with Paul Smith and Paul Belserene, two of his fellow producers from Vancouver.  The result was ‘Hear the Call’.  It was sent to Seoul, and we waited with nervous anticipation for the results. Victoria got 29 votes, New Delhi got 18, and Cardiff got 7. We were stunned and overjoyed when the news came from Seoul that we had won, and there was much joyous celebration.

Then of course, the real hard work began—building all the venues and facilities for the Games themselves, six years away, which seemed so very far off at the time. I wasn’t involved in any of those preparations, but in 1993, I received a call from Jacques LeMay, who was the head choreographer for the upcoming opening and closing ceremonies. He said there was a contest to pick a theme song to close the show, that there was a $5000 prize for the winner, and asked if I would like to enter. I said yes, of course, and went to work. I wrote “Let the Spirit Live on Forever”, did a demo and submitted it. A few days later, Jacques called and said “We have a problem.” The contest had resulted in two finalists—myself and Bob Buckley, a very talented Vancouver-based keyboardist, composer, and producer, also a friend of mine. Jacques asked if we would be willing to split the prize money. We both agreed. We recorded both songs at Seacoast Sound, and Bob’s tune ‘Let the Sprit Take Flight’ was played mid-show at the closing ceremonies and ‘Let the Spirit Live On Forever’ was the closer.

My dear friends Duncan Meiklejohn, April Gislason, and I performed the song mid-field to an estimated world-wide TV audience of nearly 500 million.  As we were singing, hundreds of the athletes left their bleachers prematurely and stormed center field, and we soon found ourselves completely engulfed in a sea of swaying, sweating, cheering, bodies. Very exciting and a bit scary.

After all the festivities were over, a celebration was put on to thank all the volunteers, staff, etc., and I was asked to write a song for the occasion.  I wrote ‘Celebrate Victoria’ and Duncan, April, and I performed it for the crowd.

The Games were a great success, and left a wonderful legacy in Victoria. I was so very proud of our little City and very proud and honoured to have played a part. Thanks to David, Mel, Gary, and all the fine musicians and singers who took part.

“Let the Spirit Live On”. 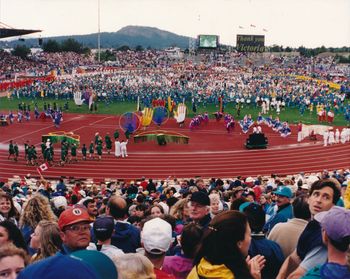 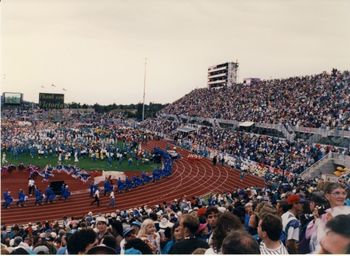 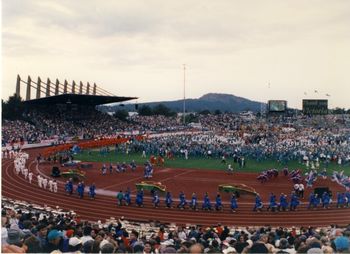 The athletes procession at U-Vic 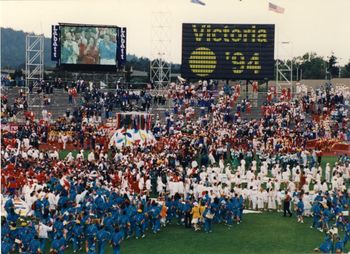 Commonwealth Games with Duncan Meiklejohn, April Gislason, and Morry up on the big screen. 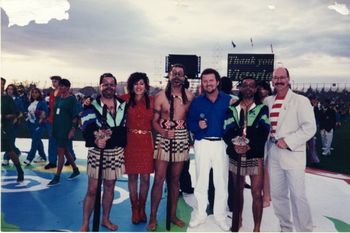 April Gislason, Morry, and Duncan Meiklejohn with weightlifters from Tonga at the closing ceremony. 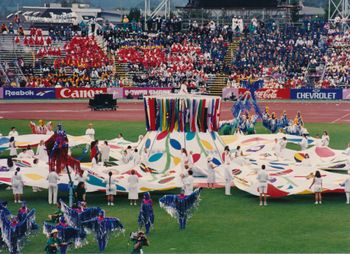 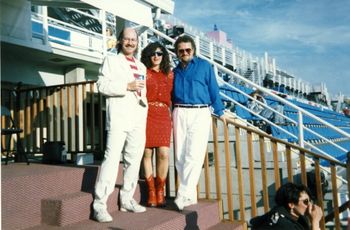 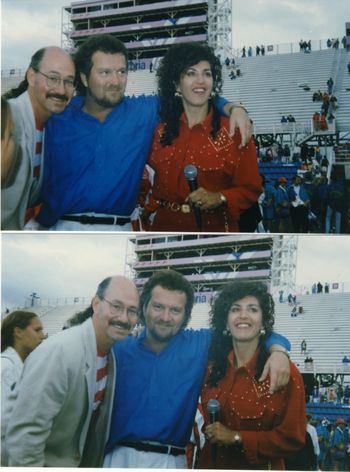 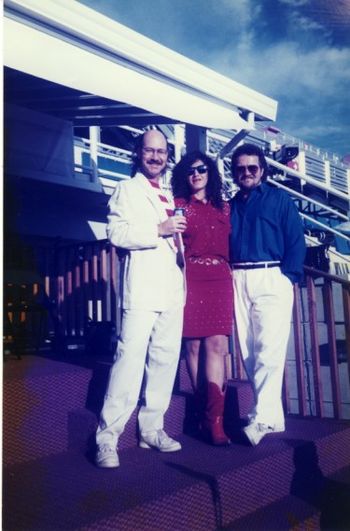 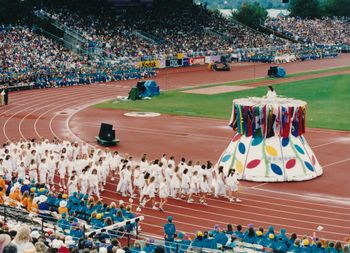 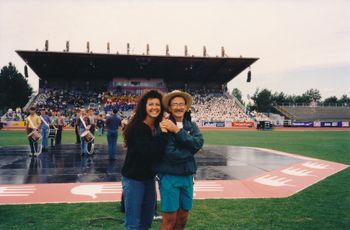 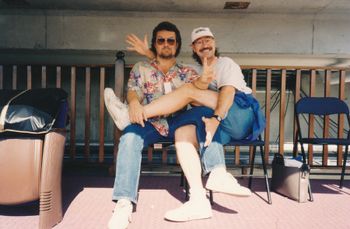 "That's what friends are for". 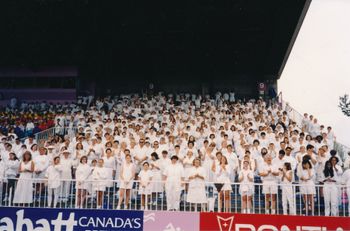 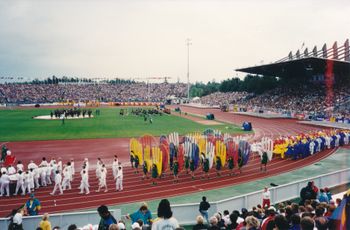 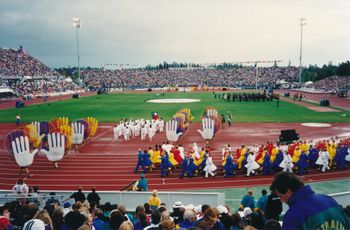 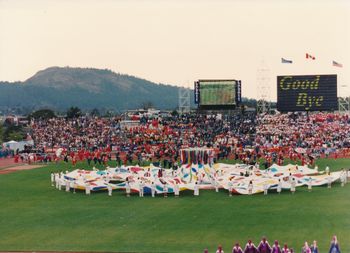