The seeds of Seacoast Sound were planted in 1980. During the last few months of The Sample Stearns Band, we were recording some demos at Keye Studios in Victoria. One of their other clients at that time was Bruce Innes. Bruce and his wife, Dixie Lee Stone, were ‘The Original Caste’, a 70’s Canadian pop group with hits like ‘One Tin Soldier’ and ‘Mr. Monday’. Bruce and Dixie had moved to Victoria from Calgary, where Bruce had established a jingle company. He formed a partnership with CFAX radio station owner Mel Cooper, and began producing jingles as ‘Bruce Innes Music’.

Discovering The Sample Stearns Band was a windfall for Bruce and for us as well. Right out of the gate, he had access to a great rhythm section, players and singers, all in one package... and we had work. We did some tracks for Bruce and played on some other Keye Studios projects.

At one point, Bruce asked me if I’d ever written a jingle. I said I’d written songs, but never a jingle. He explained the basics, such as length, style, lyric requirements, singing the client’s name and slogan etc., and gave me a file. My first client was ‘Thompson Valley Credit Union’. I can still hum it. (Tell me jingles don’t work). I wrote and produced it at Keye Studios with the help of some of the SSB boys, and as we say in the jingle biz... “it flew!” So Bruce gave me another, and then another. It didn’t take long before it became apparent to both of us that I seemed to have a knack for these things.

Eventually, Bruce made me an offer I literally could not refuse... a salary! It wasn’t huge, somewhere around $1750 per month, but in 1980 as a freelance musician going from gig to gig... it sure looked like ‘up’ to me.

During this time, Mel Cooper decided to move CFAX from central downtown to a separate, larger building on Broughton Street, and build a new recording studio on the top floor, in partnership with Bruce Innes, Dennis Ferbey (Bruce’s old friend from Edmonton), and Paul Mann. Dennis brought all the recording equipment, furniture, etc. from his studio in Edmonton. We purchased some instruments, a beautiful Yamaha grand piano, a drum kit, and away we went. Dennis asked his Edmonton engineer, Bob Benson, to move to Victoria and join the team.  He did... and became a life-long friend. Sandra Lang, formerly from Keye Studios, was hired as studio assistant and second engineer.

Over the next couple of years, we produced singles, albums, soundtracks, music for Ice Capades (which I had the honour of writing), and dozens of jingles all over Canada and the US. One of many highlights was a short Alberta tour with Bruce, Dixie, Dennis, myself, and Stu Mitchell (their former Alberta bandmate), as The Original Caste.

All in all, we had a great run, and made some great music, but by 1983, mounting financial pressures eventually led to the closing of Bruce Innes Music. Looking back, it was a time of great learning, not just about jingles, but recording and production in general, especially vocal production and session singing.  I learned much from Bruce and Dennis, and I’m very grateful for the experience.

When Bruce Innes Music ended, I returned to playing gigs around Victoria, the Island, and some on the road. I also did some shows with Norm MacPherson and our old friend, Valdy. It was on one of these Valdy gigs, somewhere up-Island, that I got a message from Mel Cooper. He said he was re-opening the studio under the name ‘Seacoast Sound’, and asked if I was interested in returning to work as production manager. I was stunned... and thrilled. He also said he had a client for me... a fashion boutique close to where we were playing, called ‘A Touch of Class’, and that I should go see her. I did... and ended up writing her jingle... my first for Seacoast Sound.

Thus began a whole new chapter in my musical and personal life. The next few years were a wonderfully creative and productive time. To begin with, as any freelance musician would agree, having a full time salaried job with benefits while being paid to write and produce music in a beautiful studio was and still is a very rare and precious opportunity.

As time went by, the ‘team’ grew. Mel’s son, Dean Cooper, took over as general manager, Bob Benson and Sandra Lang stayed on, and we were soon joined by Duncan Meiklejohn and Dale Baglo, two very talented writers and musicians, who moved to Victoria from Kelowna. As we got busier, we added a third engineer: Rick Erickson, (Dennis Ferbey’s friend, also from Edmonton) and eventually Dennis himself returned as a writer.

I went on to write and produce literally dozens more jingles for radio and TV. We produced jingles for Canada, the US, the UK, New Zealand, Japan, and Hawaii, including clients like McDonalds, KFC, Denny’s, AirBC, and Chrysler. I was commissioned to write several larger soundtracks, including music for both of Victoria’s winning bids to host the 1994 Commonwealth Games, music for The Canada Summer Games, and others.

I had the opportunity to produce, play, and sing on many different singles and albums for other artists. I wrote ‘Pass Me the Torch’, to commemorate Steve Fonyo’s cross-country journey, completing what Terry Fox had started. The song aired nationally and I sang it live as he dipped his prosthetic leg in the ocean at Mile 0 on Dallas Road in Victoria. In 1990, I was commissioned to write a song to commemorate the 20thAnniversary of Earth Day.  The result was ‘Mother Earth’, named Canada’s Earth Day song, which was made into a video and also aired nationally.

Being allowed the use of the studio after hours was a great privilege, and was instrumental in helping me develop my songwriting and production skills.

During my years at Seacoast, I also produced several cassette albums of original material, a couple of singles, and eventually, my first major label solo album ‘Power in Our Hands’, on the Polydor label.

As the late 80’s morphed into the early 90’s, rising costs and a decline in the ever cyclical jingle biz, eventually brought about the closing of Seacoast Sound, but I have no regrets... only much gratitude and lots of great memories.

From the inception of Bruce Innes Music, right through to the closing of Seacoast Sound, I enjoyed a nearly 13-year run... doing what I loved most:  making music and getting paid for it. It doesn’t get much better than that.  Just like the SSB alumni, the Seacoast Sound alumni or ‘Seacoasters’ as we call ourselves, remain close friends to this day, and often work together on various projects.

Thanks to all for sharing the adventure. 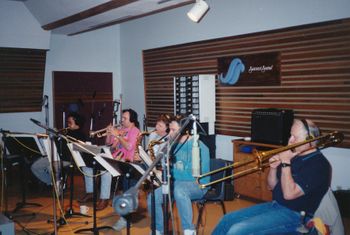 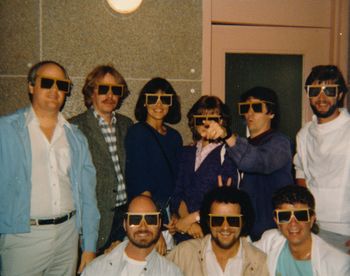 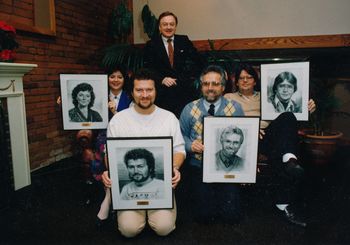 Receiving CFAX Performer Of The Year Award, with Mel Cooper and other recipients. 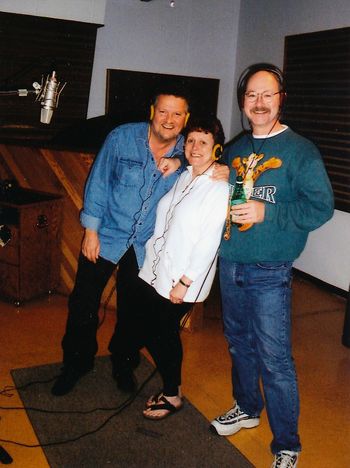 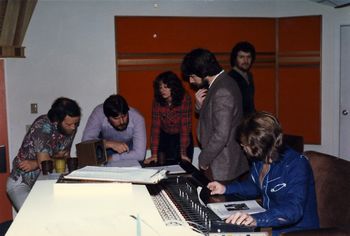 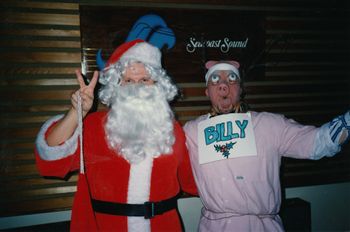 Morry as Santa, Duncan as 'Billy the Christmas Pig' 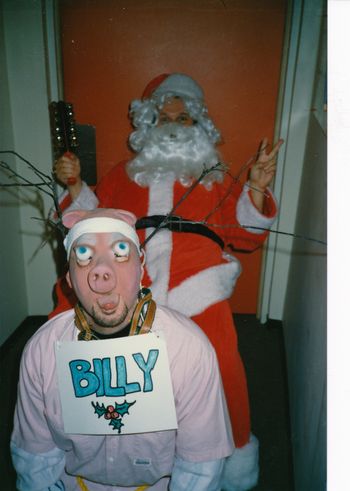 Billy the Christmas Pig arrives to give presents to CFAXers 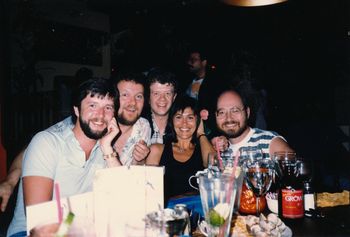 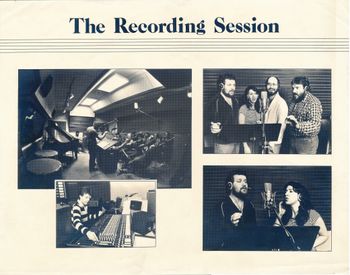 A promo piece for the studio 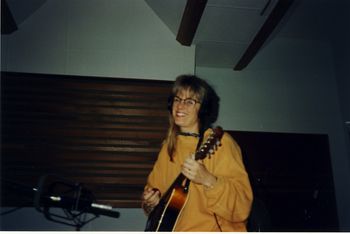 Shari Ulrich playing mandolin on ' One More Color', from the 'Power in Our Hands' album. 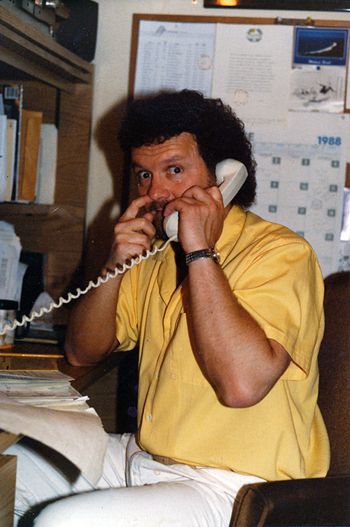 Hard at work in my office. 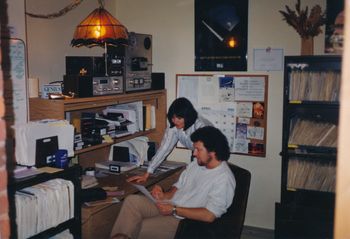 More hard work in my office. 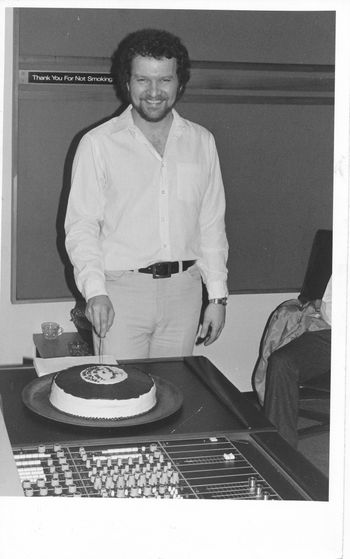 Mrs. Cooper baked me an album shaped cake to celebrate my first 'single'. 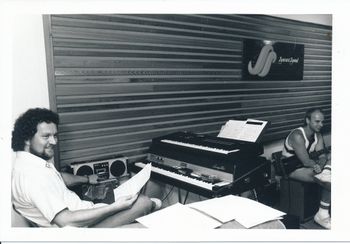 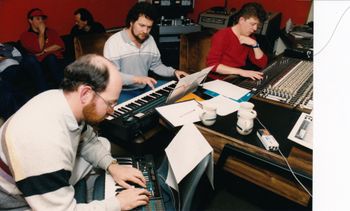 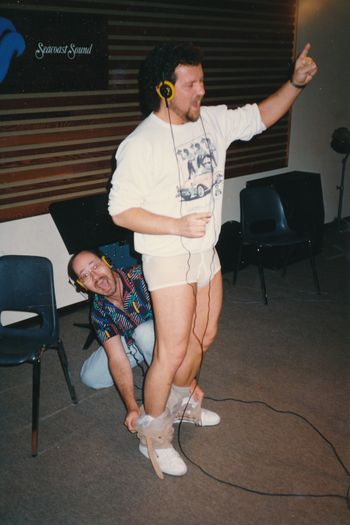 For chris'sake Duncan... I'm trying to lay down a vocal here! Do ya mind? 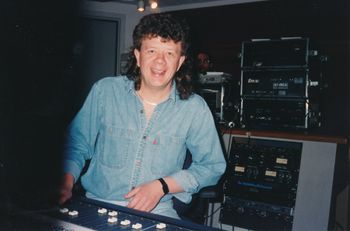 Bob Benson in the studio 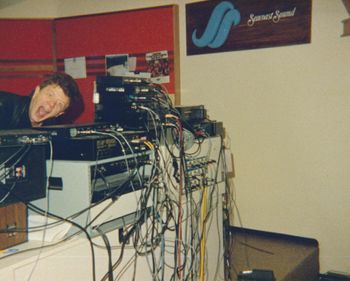 What are all these wires for? 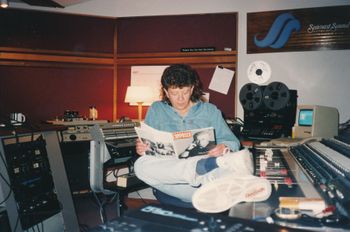 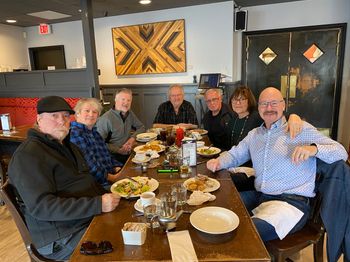