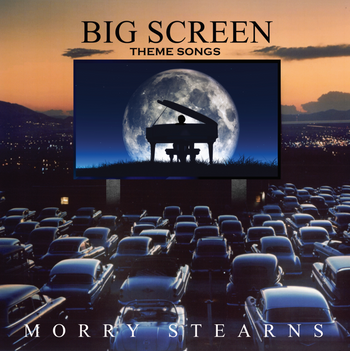 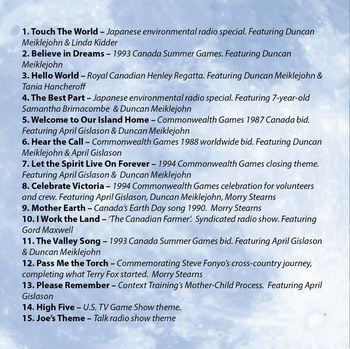 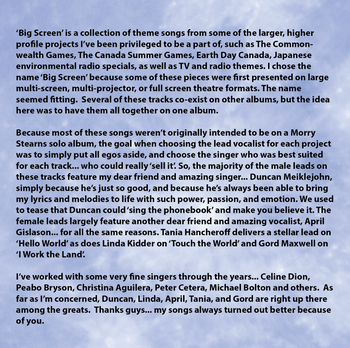 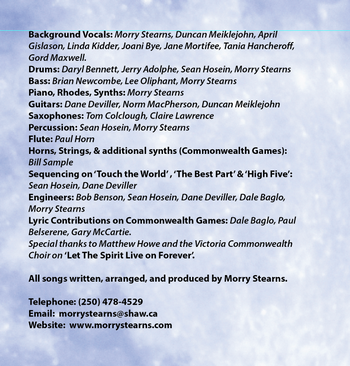 1. Touch The World – Written for ‘Earth Carnival’, a nation-wide Japanese environmental radio special. The song was recorded by Peabo Bryson and Japanese pop star Kiyomi Suzuki. I had the pleasure of working with Peabo in New York, teaching him the song and producing his vocal. This version features Duncan Meiklejohn and Linda Kidder.

2. Believe in Dreams – In 1993, the city of Kamloops BC won the right to host the Canada Summer Games. This theme was from their winning bid.  Featuring Duncan Meiklejohn.

4. The Best Part – Produced for a Japanese Environmental Radio Special. The song was recorded by Peabo Bryson and Japanese child pop star, Nadia Gifford. A little girl asks her Daddy if the world will be a safe and beautiful place for her when she grows up and has children of her own. Dad answers the best way he can... with the truth, hope, and a promise.  Featuring 7-year-old Samantha Brimacombe and Duncan Meiklejohn.

5. Welcome to Our Island Home – In 1987, Victoria submitted a bid to host the 1994 Commonwealth Games.  Other bids came from Halifax, Ottawa, and Vancouver/Richmond.  Victoria won the right to represent Canada.  This track was part of that winning bid.  Featuring April Gislason and Duncan Meiklejohn.

6. Hear the Call – In 1988, the world-wide competition was held in Seoul, Korea. Entries included Victoria (Canada), Cardiff (Wales), & New Delhi (India). We were thrilled and honoured to win the right to host the games.  Featuring Duncan Meiklejohn and April Gislason.

7. Let the Spirit Live On Forever – Theme for the 1994 Commonwealth Games closing ceremonies. Duncan Meiklejohn, April Gislason, and I performed the song mid-field to an estimated world-wide TV audience of nearly 500 million.  As we were singing, hundreds of athletes left their bleachers prematurely and stormed center field. We soon found ourselves completely engulfed in a sea of swaying, sweating, cheering bodies.  Very exciting, and a bit scary. Featuring Duncan Meiklejohn & April Gislason.

8. Celebrate Victoria – After all the Commonwealth Games festivities were over, a celebration was held to thank all the volunteers, staff, and crew. I was asked to write a song for the occasion.  Duncan, April, and I performed the song for the crowd.  A joyous day!  Musicians may notice that as the track ends, the main signature melodies of ‘Welcome to Our Island Home’ and ‘Hear the Call’ are repeated, just to nicely ‘button things up’ and say “farewell”.  Featuring Duncan Meiklejohn, April Gislason, & Morry Stearns.

9. Mother Earth (The Earth Day Song) – Morry Stearns.  'Mother Earth' was commissioned by Earth Day Canada in 1990 to commemorate Earth Day's 20th anniversary. It was produced in English and French, made into a video, and aired nationally.  The song has been used and performed many times through the years in schools, choirs, and environmental festivities.

10. I Work the Land – From ‘The Canadian Farmer’, a long running syndicated radio show on farming and agriculture.  Featuring Gord Maxwell.

11. The Valley Song – In 1993, Abbotsford BC on behalf of the Fraser Valley submitted a bid to host the Canada Summer Games, along with Nanaimo and Kamloops. I had the honour of composing the music for both Abbotsford/Fraser Valley and the eventual winner, Kamloops.  The song was meant to convey the natural beauty and majesty, the very ‘heart’ of the spectacular Fraser Valley with all its’ abundance, resources, and its’ people. Featuring April Gislason and Duncan Meiklejohn.

12. Pass Me the Torch – Morry Stearns.  In 1990, a young man named Steve Fonyo, who like Terry Fox, had lost a leg to cancer, completed what Terry started.  I sang the song live in the pouring rain as he dipped his prosthetic leg in the ocean at Mile Zero, Dallas Road, Victoria, BC. The song aired nationally to commemorate his journey.

13. Please Remember – A gift to Context Training's 'Pursuit' program to be used in their 'Mother-Child' process. It asks that the child look back with forgiveness and love, and try to understand that even with all the mistakes, hurts, and failures, our parents did the best they knew how to do at the time, with what they had and were. And that even though it may have been sometimes hard to see, we were always loved. It features April Gislason.  For Jason.